Each team has a core of teachers that teach social studies, science, English/language arts, and math. Six classes are offered outside of the teams and these are referred to as the Rotational classes (computer, music, health and wellness, art, career and consumer exploration, and industrial technology).

Students also take physical education and have an enrichment/intervention class to round out their eight period day. The E/I class has several purposes. Some students are assigned to Choir, Band, and Orchestra during their E/I class. Some students may use the time for RtI (Response to Intervention) academic help. Still, others are assigned to a study hall allowing them extra time to do work during the school day.

The school schedule is 8-45 minute periods per day (42-minute periods on Wednesday to allow for the early-out teachers' meetings). There are 3 minutes passing time between classes. Students have a 35-minute lunch during either 5th or 6th-period class. 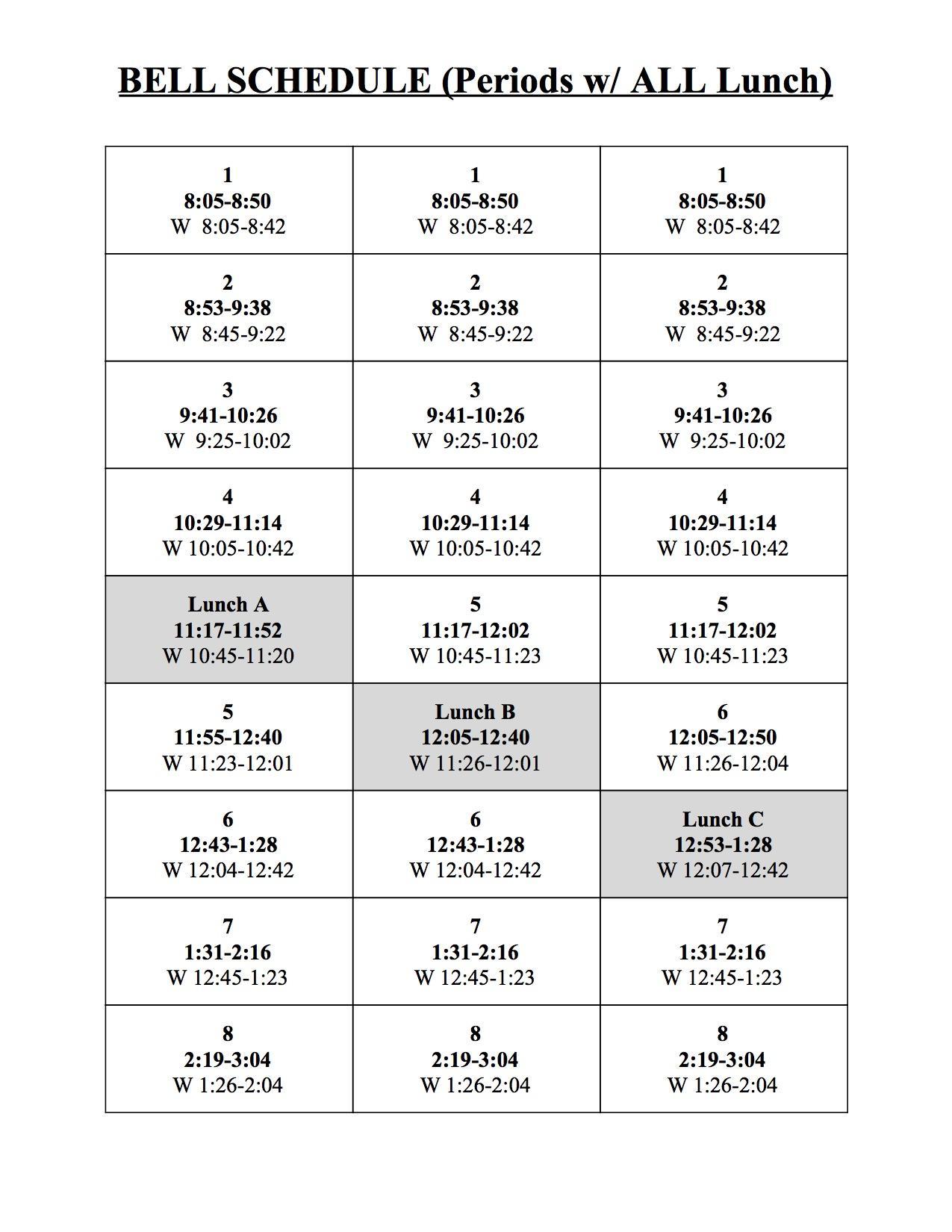 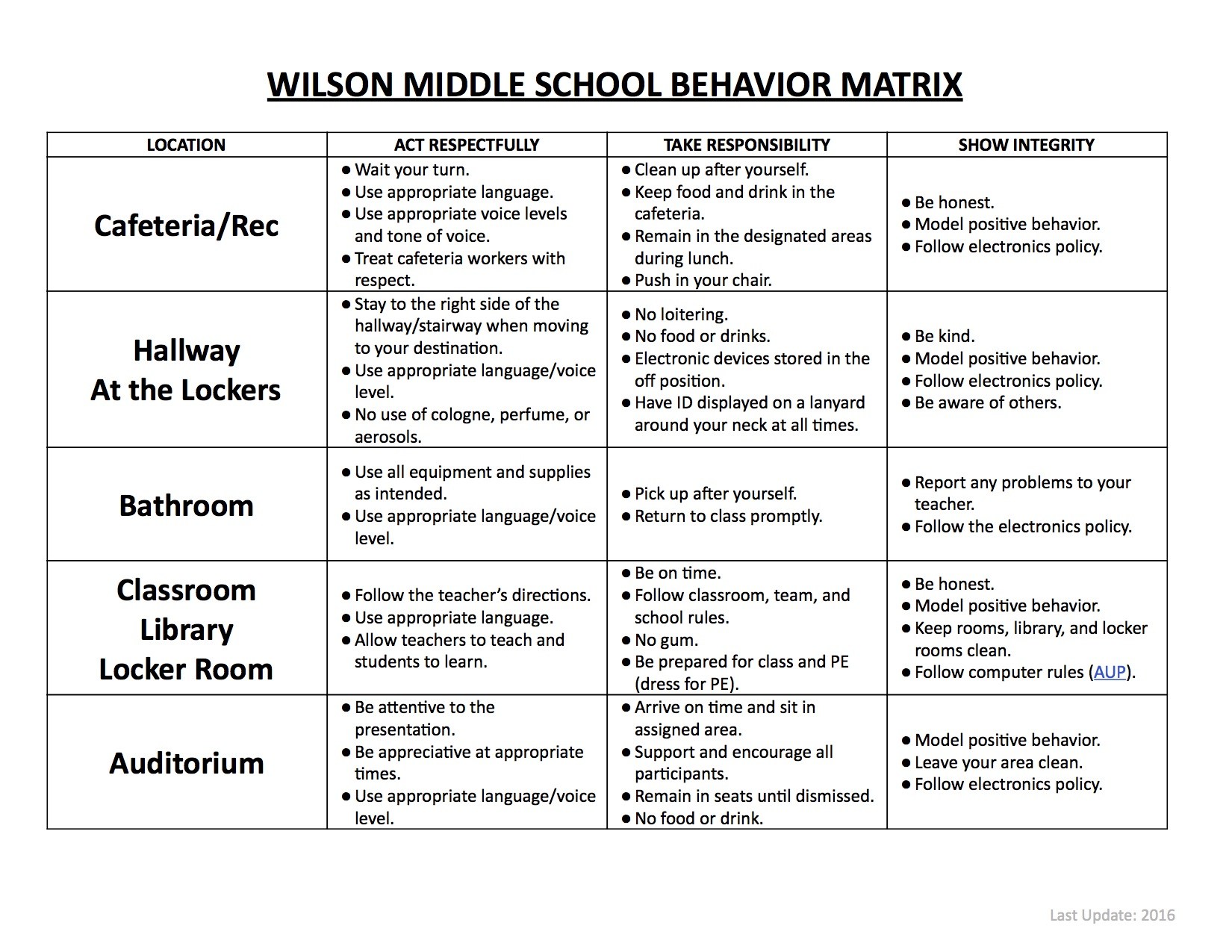 The 60s
Woodrow Wilson Junior High School opened its doors on January 29, 1962. The school was originally supposed to open in the fall of 1961, but the construction was delayed. Wilson and Coolidge Junior High students and staff split the school day and shared the Coolidge building during the fall semester. Coolidge students attended classes there from 7 a.m. to noon, while Wilson students and staff held class from noon until 4 p.m. The 1960s was a decade full of big hair and short shorts for the guys. During this time, females were not given the opportunity to play sports. From the opening of school until 1982, 9th graders attended WMS.
The 70s

The 1970s was an influential decade in history. One major event of the 70s was Title IX, a federal act that states that "No person in the United States shall, on the basis of sex, be excluded from participation in, be denied the benefits of, or be subjected to discrimination under any education program or activity receiving Federal financial assistance..." This meant that public schools were required to offer girls' sports.

Other newsworthy events included the following: The Beatles released their last album, Let It Be, in 1970. The World Trade Center towers were also built in the 70s. It was the decade of the "energy crisis" and the beginnings of the environmental lobby. President Carter helped organize peace talks between Egypt and Israel. And let's not forget disco!
The 80s
The 80s were know as the decade of liveliness and having fun. Between the ups (M-TV, Pac-Man, Michael Jackson's Thriller album, and the end of the cold war) and downs (AIDS, the troubles of gun control, the struggle of Eastern European countries including the Chernobyl nuclear disaster), it was a memorable decade.

Wilson Middle School underwent a great change in the 80s. First, the decade started with three grades: 7th, 8th, and 9th, but in 1983, the 9th grade was moved to the high school. Coolidge Junior High was closed and its students and staff were split between the two remaining junior highs. Thus, we retained the same number of students, but only in grades 7 and 8. The Crystal Ball with its selection of Crystal Court was abolished with the departing freshman class.

Second, there was a major restructuring in the school set-up. In 1988, the middle school concept of teams was introduced. When once teachers were associated by department/curricular area, now they are grouped in cooperative teams by grade level.

Other notable facts: The first computer lab was established in the mid-80s. It included 20-Apple IIe machines. The young people of the time are known as Generation X. They are more diverse in such aspects as race, class, religion, ethnicity, and sexual orientation than previous generations. They statistically hold the highest education levels of any generation to date. They are our parents and our teachers. We secretly enjoy 80s music and get laughs from the loud clothing styles of the time.
The 90s
Advancements in technology were beginning to really boom in the 90s. Computer classes in their new lab were now expanded to a rotational (one quarter) class. John Harris, an 8th grader in 1995, recruited his friends and used his own video and editing equipment to produce WMS-TV, four episodes recapping the school events during the year.

The 90s were a time full of new beginnings and exciting events at Wilson. There was a renewed sense of school spirit and there were many "family" activities. Examples included the explosion that was the 1994 Spirit Week. An entire weeks worth of student-centered events was planned, and Mr. Beem and Mrs. Roller were crowned the first Faculty Spirit King and Queen. Each year since then, a new piece of spirit wear has been added to our teachers' wardrobes. A new paint job in 1999 spruced up the building and school spirit. The gym went from a drab grey to an exciting black, gold, and white. 8th Grade Recognition was spearheaded by Mrs. Welvaert in the spring of 1995 to celebrate the accomplishments of our outstanding students.

Many special events were planned for our students. Trendsetters, Wilson's drug-free program, offered special interest groups for all. You could create sweets, complete jigsaw puzzles, trade baseball cards, do archery in the school gym, go bowling or midnight skiing. Family events included a taco supper with a jalapeno-eating contest, "Celebrate Family" - an evening for community organizations to demonstrate what they offer our students and their families, and the beginning of the faculty's long-run of volleyball wins against the students. One December, Winter Wonderland was a week-long festival of decorating, music, and an open house.

Wilson continues to build on tradition and many of those traditions began in the 90s.
The 2000s
The 2000s have flown by in the blink of an eye. The start of the 21st century and the third millennium has seen many tragic events but also positive ones to counteract them. During the 2000s, we have had terrorist attacks, natural disasters, wars, recessions, global warming, starvation, and many deaths. But each of those events has inspired us to work together for good causes - assisting others in need, protecting our environment, supporting our troops, or performing random acts of kindness. Our everyday lives have been greatly affected by globalization, meaning the countries of the world are more interconnected by political ideas, communication, transportation, and trade.

Identifying positive events of the last decade has proved difficult. The population of the United States reached a milestone of three hundred million. The Internet is more popular than it ever has been before. Nearly 518 billion people have facebook accounts. That is 7% of the WORLD's population. In 2004, the one billionth song was downloaded from the internet music store, Apple iTunes. Plus, it only took nine months from the launch of Apple's App Store for one billion apps to be downloaded. Both are major feats of modern technology. The first female Speaker of the U.S. House of Representatives, Representative Nancy Pelosi of California, is sworn into office. Barack Obama wins a landslide margin making him the first African-American President in the history of the United States of America.

The most extensive movement in education came with the passage of the No Child Left Behind (NCLB) Act in 2002. NCLB is based on the belief that setting high standards and establishing measurable goals can improve individual outcomes in education. The Illinois Standards Achievement Test has been a big deal during the first 10 years of the new century. Other programs have been implemented to help students achieve more. You know them as Kagan, Mel-Con, MAP, and RtI. Wilson Middle School continues to strive for NCLB compliance and there was a major push for outstanding performance (86% meet or exceed) on the 2011 ISAT.

We do all of this while under the process of a complete facelift. The construction started in May 2010 and continued through the summer of 2011. The school was gearing up to receive 600 new students in the fall of 2011 with the transfer of the 6th graders along with the incoming 7th-grade class. It marked a new beginning, the first steps into the next 50-year stretch.